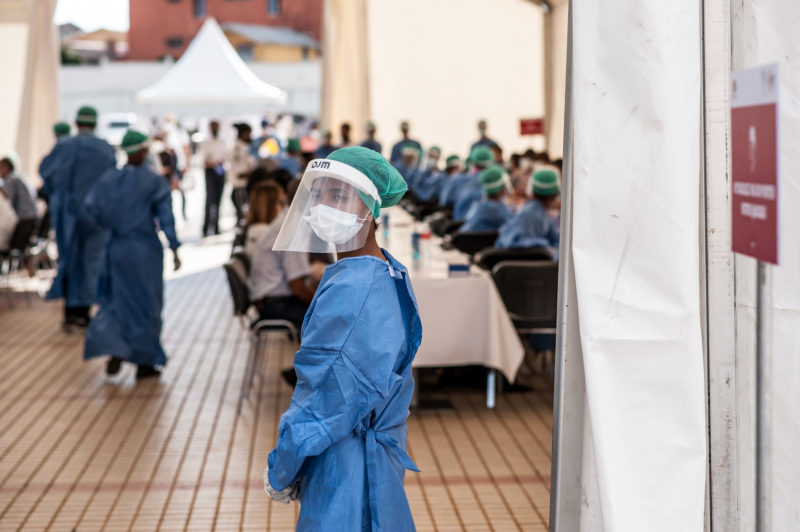 J.S. Wolfe in "The Unfolding: A Journey of Involution" argues that "we either choose to identify with the projector that controls the vision, or we identify ourselves with the projection. This is the difference between creators and victims."

The last two years have pointed to the global failure to put health at the centre of national policy planning. Even in countries with advanced health systems, the proportion of Gross Domestic Product (GDP) invested in health has been negligible. This has led to a serious shortage of health professionals across the world. The World Health Organisation (WHO), through its global health human resource projections, predicts that by 2030 there will be a deficit of approximately 15 million health workers.

Based on this, it is expected that there will be a significant movement of health professionals from lower middle income and middle-income countries to the developed world. Compounding this further are the low numbers of health workers that are being trained in these lower-middle-income countries. With Africa's population growing annually by approximately 2.7%, these factors are expected to have a compounding effect to the point that of the 15 million global health worker shortage predicted in 2030, 6 million (40%) will be on the African continent.

In the last year, following the easing of travel restrictions during the COVID-19 pandemic, there is evidence that health professional migration from anglophone African countries has increased; with major destinations being the United States, United Kingdom, Australia and New Zealand. Member States of the Gulf Cooperation Council have also intensified their drive to recruit health workers from Africa too. This makes it likely that the deficit in 2030 could be even larger than predicted. All this has been happening at a time when COVID-19 has been ravaging the continent. Though the economic impact of the pandemic is visible to all, the health impact seems to have been downplayed possibly due to the significantly low Case Mortality Rate (CMR).

Information on the WHO Africa website this week gave us cause for concern. Our attention was drawn to the fact that almost two years into the COVID-19 pandemic, only 14.2% (one in seven - COVID-19 infections are being detected). Based on their projections, they suggest that "the cumulative number of COVID-19 infections in Africa is estimated to be 59 million, seven times more than the over 8 million cases reported."

With data evolving on the long-term public health implication of COVID-19 infections on humans, a deficit of 85.8% of undetected infections on the continent should be a matter that countries need to take steps to urgently address. This is because, though the cumulative numbers of mortality across the African continent have been low, we could end up being saddled with a public health disease burden without the requisite numbers of human resources to manage them. The continent, therefore, needs to fashion out a new strategy to augment its testing regime, if this risk is to be averted.

Recent publication by researchers from the University College London’s Institute of Epidemiology and Health Care suggesting that lateral flow antigen tests are more accurate in detecting COVID-19 infections than previously thought should be welcome news to the continent. This is because the cost of these tests is less than a tenth of polymerase chain reaction (PCR) tests which have been at the heart of most of the testing on the African continent.

The collective impact of the low cost and high accuracy of these antigen tests has led countries such as the United Kingdom to change the guidance for fully vaccinated people entering their countries. From the 25th of October travellers who can prove their vaccination status will not require a pre-travel PCR test; neither will they require a similar test upon entering the country. Instead, they will have to book an antigen test to be performed on the second day post-arrival. This is a clear indication that antigen tests will not increase the public health risk due to false-negative tests. The advantage of such a strategy is to open travel corridors whilst decreasing the financial burden on travellers.

With most on the African continent failing to comply with the protocols that minimise the transmission of SARS-CoV-2, and data suggesting that 65% to 85% of COVID-19 infections on the continent generate few or no symptoms, countries must evolve their testing protocols and make them proactive, compared with the current reactive approach where the majority of people tested attend a health facility with symptoms. This can be done by considering mass community antigen testing. The further advantage of this is that, these tests can be self-administered, provide quick results, decrease the pressures on our testing centres, drive down mortality through the early identification of infected persons, just to name a few. More importantly, it could break the community transmission chain much quicker than the vaccination would, going by the slow rate of vaccination rollout on the continent.

No one should delude themselves that the continent has seen the worse of this pandemic. With the year coming to an end, human movement due to Christmas activity would more than likely result in a significant spread of the virus. The continent cannot afford another wave of this pandemic, neither can the world risk the possibility of new variants emerging. This is why we believe that, whilst fashioning out options to obtain enough vaccines for the continent, attention should be paid to the augmentation of testing.

More well-off countries can donate test kits to the continent, if there are no local funds to back such a change in strategy. Much as this will be seen as Africa yet again going cup in hand to others to help with the management of our health systems, it may just be the only option left to roll out large scale community testing. Africa has a choice to make. We can either choose to deal with the situation now or manage the projected outcome at a later stage. Political leaders cannot ignore the writing on the wall by kicking this situation into the long grass. If they do, the cocktail of long COVID-19 with its mix of chronic diseases would be the legacy of this pandemic. Also, the impact of the health human resource deficit will be more marked.